Milk: When dairy won't do 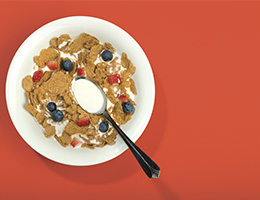 Feb. 26, 2020—Many people can't drink cow's milk. Some are allergic to milk protein or unable to digest the lactose sugar found in cow's milk. And some people have chronic digestive conditions, like Crohn's disease, that might be irritated by milk.

Others choose not to drink cow's milk for different reasons, according to the American Society for Nutrition. For instance:

For those who can't or don't want to drink cow's milk, there are a lot of alternatives on the market today. But how do these options compare to cow's milk? Do they offer as much calcium and protein as traditional dairy? And how do they stack up in other nutrients?

Here's how some common nondairy alternatives stack up:

Almond milk. It has fewer calories and more calcium than cow's milk—but less protein and vitamin D and more fat and sodium. When it comes to cooking, almond and other plant-based milks may not stand up to heat as well as cow's milk.

Coconut milk. This option is lower in calories and sodium than cow's milk, and it has more calcium. But it's very high in fat. It has very little protein and less vitamin D than cow's milk too. It has a unique taste, but if you like it, it can substitute well for cow's milk in recipes. Still, because of the high fat content, it's probably best to use this sparingly.

Rice milk. This has similar calories, fat, calcium and sodium as cow's milk. But it's less nutrient-dense. For instance, it has less vitamin D and very little protein. It might be a good option for people with nut or soy allergies, but it's important to look for protein and other nutrients elsewhere.

Soy milk. Soy is the closest option to cow's milk nutritionally. It has slightly more fat and slightly less protein. But it's a good source of calcium and vitamin D—and similar in calories and sodium to cow's milk.

Other milks. In general, milks made from oats, hazelnuts, hemp and cashews tend to be lower in protein than cow's milk. Pea and flaxseed milks may have more calcium. Whatever milk you choose, it's a good idea to look closely at the nutrition facts—and price—before choosing one. Alternatives like these may be more expensive than some of the options above.

Also keep in mind that homemade nut milks may have fewer vitamins than store-bought versions because they haven't been fortified.

And if your choice is driven by environmental concerns, be aware that plant-based milks can also have an effect on the environment. Almonds, for instance, require a lot of water to grow. Soy and oats need a lot of land. And rice emits the most greenhouse gases.

Breast milk is best for babies for at least the first six months of life. After that, most kids can be introduced to dairy foods like plain yogurt and cheese. But the American Academy of Pediatrics (AAP) recommends waiting until 1 year of age to try whole-fat cow's milk. The AAP suggests keeping kids on whole-fat milk until they are 2 years old, before switching to lower-fat alternatives.

If your child has a milk allergy or you choose not to give cow's milk for other reasons, talk with their pediatrician about the best way to make sure they're getting the nutrients they need for healthy growth.

Milk is a good source of vitamin D, which helps kids and adults absorb enough calcium to build strong bones. Find out how much vitamin D you need every day—and how to get it.