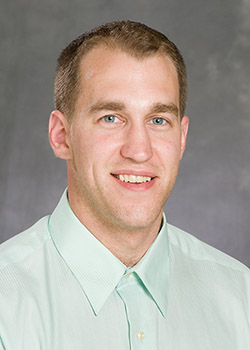 Overgaard concedes plenty of men do communicate openly with their doctors, just as there are women who minimize their health issues. Even so, he believes males feel more compelled to remain stoic when it comes to issues of health.

“I think we put this pressure on ourselves as men,” he says. “A lot of it comes from the sense of pride we get – not just that I’m tough and I’m a man – but that we value ourselves for our work and for taking care of our families. We put those things first and we put our health second.”

In line with National Men’s Health Month, Overgaard offers a list of five symptoms men routinely ignore – even though they shouldn’t.

Feeling low; for no reason. While situational depression – depression triggered by a certain incident or experience – is normal, men and their families should take notice if they experience a lingering sadness for no particular reason, Overgaard says.

How can he know he’s depressed? Watch for examples like this: Once an avid fisherman, he doesn’t feel the need to fish anymore. He has trouble sleeping or sleeps too much. His anger or irritability is disproportionate to relatively minor incidents. His appetite is nil, or he’s suddenly gorging on all the food in the house. He seems angry, anxious or depressed more days than he seems content.

Loved ones may have to diplomatically broach the topic if the men in their lives aren’t talking about it. “Honestly, I think most of the time they’re not even aware of it,” Overgaard says. “I don’t think there’s the same amount of self-reflection on how we feel as women seem to have. Women spend more time thinking and talking about those sorts of things, while – for a man – he might say, ‘I’m cranky and it’s hard to put a word on it.”

Shortness of breath. People tend to think they’re short of breath because they took the stairs too fast or are out of shape. In fact, trouble breathing – especially if it comes on relatively quickly – can signal heart disease and lung disease. Overgaard has found that people don’t really identify shortness of breath as an issue until he digs deeper. It’s only when he asks something like, “Did you have more trouble shoveling your walk this winter than you did last year?” that he will learn there might be a more serious problem.

Snoring. One of the consequences of the obesity epidemic in our country is that more people have developed obstructive sleep apnea, Overgaard says. Weight gain causes extra fat to build up everywhere – including the throat. This makes it easier for tissue to block our air passages as we sleep.

Apnea causes abnormal pressure in the chest cavity, which wakes up the sufferer because he can’t breathe. This can happen numerous times a night, with the person unaware that he ever woke up. This abnormal chest pressure, coupled with oxygen deprivation, can lead to high blood pressure, heart damage and scarring of the lungs.

Possible indicators of apnea include snoring, gasping for air while asleep and feeling chronically sleep deprived (napping frequently, nodding off during movies, etc.). Apnea is typically diagnosed after a sleep study, then treated with use of a CPAP machine (which maintains constant air pressure in the throat so the airway doesn’t collapse). Mild cases of apnea may be treatable with a mandibular device prescribed by a dentist or, on rare occasions, surgery.

Exercise deficiency. Although Overgaard jokes this is one of the two “EDs” that men shouldn’t ignore (the other being erectile dysfunction), he’s serious when stressing how important it is to stay active.

“It’s important to recognize that almost every single tissue in our body is affected by exercise,” he says. “Your heart, your lungs, your blood vessels, your mind, your skin.” Although we know exercise helps to stave off everything from obesity to heart disease, people often don’t exercise because they can’t see the immediate benefit.

Overgaard says one motivator would be taking people into hospitals and nursing homes to show them all the people who might have avoided serious illness if they had started exercising 10 years earlier.

As a general rule, he recommends 45 minutes of exercise five to seven times a week. It should be brisk enough to get your heart pumping and to break a sweat. Vigorous activities like yardwork or chopping wood call count toward your workout goal.

And it’s never too late to start. “They’ve taken people who are elderly with dementia and put them in exercise programs for both cardiovascular and resistance training,” Overgaard says. “They find they’ll start doing better in both their day-to-day activities and neuropsychological tests.”

Erectile dysfunction. “The other ED” should concern men, and it’s not always for the immediately obvious reasons. One is that ED could signal problems with blood flow in the arteries. And that could be a canary in the mineshaft for heart disease.

The other is that “sex is an important part of life,” Overgaard says. “It’s going to be a better day when people can talk about how it’s normal to have sex, to enjoy sex, and it’s important for our mental health. You have to be comfortable talking to your doctor about it, and if you’re not, talk to another doctor, a counselor or urologist. It’s an appropriate topic for a medical visit.”

Whether it’s one of the five signs mentioned here or another health concern, Overgaard says the bottom line is for men to be actively engaged in their health in order to fulfill their other goals in life.  “We need to be healthy in order to succeed at anything else. It’s important to recognize that if you ignore your health, you may not be able to do your job or take care of your family.”